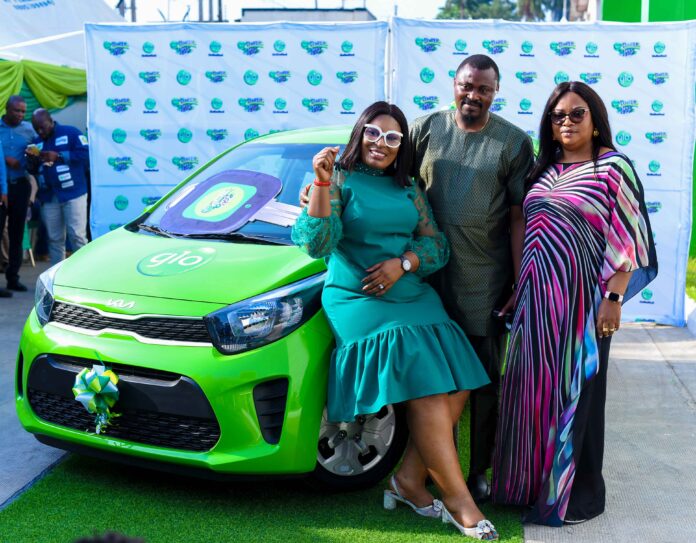 Other winners also received prizes ranging from power-generating sets to sewing machines and rechargeable fans among others at an impressive presentation ceremony held at the new ultra-modern Gloworld at Ring Road, Ibadan.

The event was attended by the Deputy Governor of Oyo State, Chief Adebayo Lawal; Commissioner for Trade and Investments, Chief Bayo Lawal; the Chairman, Ibadan South West Local Government, Honourable Kehinde Akande, and other members of the state executive council.

Mrs. Adeife Abiodun-Adeyemi, a 34-year-old Events Planner who won the car, said it came as a pleasant surprise. “I have always used Glo, it is my business hotline, so I usually recharged heavily on the number even before the promo. When I learned that Glo was rewarding its subscribers, I intensified mine recharges. I am happy that my loyalty to Globacom over the years has paid off”, she enthused.

Mr. Temitope Salako, a 38-year-old business centre operator, who won a sewing machine said it was an answer to his prayer as he intends to give the machine to his younger sister who is a fashion designer.

Oyindamola Alabi, a student of Agriculture at the Ladoke Akintola University of Technology, Ogbomoso, thought it was a lie until she received her prize, while 24-year-old Dolapo Aremu, a mother of one who won a rechargeable fan, thanked Globacom for the rare privilege of winning the prize.

The Deputy Governor gave kudos to Globacom for empowering its subscribers through its loyalty reward promos, saying that the company had remained committed to bettering its lot not just through its products and services but also through its social responsibility schemes.

The Regional Sales Manager in the state, Mr. Ikechukwu Onuekwusi, disclosed that the prize-giving train will move to Abuja on Friday to present prizes to lucky subscribers who emerged winners in that region, and will from there take the Festival of Joy to other cities around the country.

He enjoined voice and data subscribers who wish to participate in the promo to dial the dedicated short code *611# and keep recharging (voice and data during the promo period) in order to be eligible to win the prizes on offer. ” The more the recharge, the higher the chances of winning, he added.

“Subscribers who desire to become landlords and landladies of 3-bedroom houses courtesy of GloFestival of Joy must make data subscription(s) of at least N20,000 during the promo period, while those who are interested in winning cars should make a monthly recharge of N10,000; N5,000 monthly recharge for power generators, N2,500 monthly recharge for sewing machines and N500 weekly to win rechargeable fans”, Onuekwusi further explained.