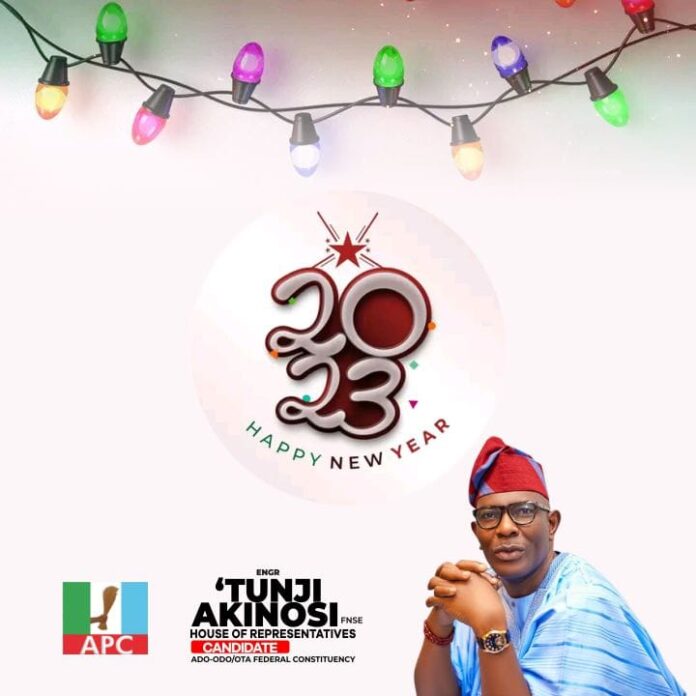 The All Progressives Congress (APC) candidate for Ado-Odo/Ota federal constituency in the upcoming general elections has called on Nigerians to be in Unity as they mark the end of the year and open the chapter of 2023.

In his new year message, Engr. Tunji Akinosi noted that the Unity of the country remains the duty of all Nigerians irrespective of background, class, or religious beliefs.

“It’s a new chapter for us all and I would like to urge Nigerians to be United in purpose and direction. We shouldn’t amplify comments that are divisive or even encourage the separation of one part of the country from another.

Noting that the country is repleted with great potential in humans and natural resources, the APC chieftain added that the country can only reach its desired land if all its parts work as one.

The immediate past commissioner for Forestry, however, called on the people to vote en masse for APC in the upcoming elections, saying the party remains the best option.

“I would urge our people to vote for APC in order to continue to leverage the progress that our party has brought to the Nation in the last seven-and-a-half years.

While wishing Nigerians a happy and prosperous new year, he charged them to remain focused and determined in their resolve for a better society.