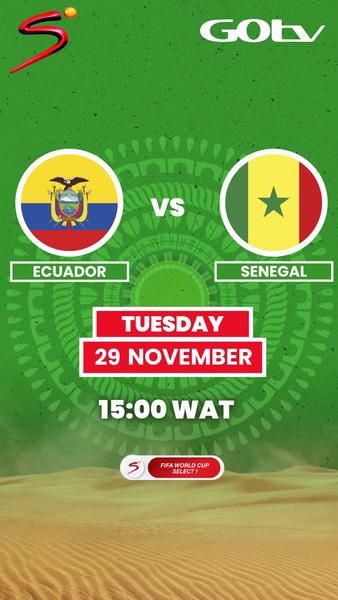 Senegal’s hope of qualifying for the Round-16 is hanging on their ability to secure a win against Ecuador for their final group stage game showing on DStv and GOtv.

Having defeated Qatar, the Teranga Lions restored their chances of making the next round. Today, they need to secure maximum points to displace Ecuador from second place. The tie will be broadcast on World Cup Select 1  (DStv channel 205 and GOtv channel 31) at 4:00 pm.

Senegal’s coach, Aliou Cisse has urged his team to remain concentrated to get the job done. “We have to think about the appropriate approach to the last match. We need to win to have a chance to qualify for the last 16.

“Our concentration must be better as we could have avoided the goal that we conceded (against Qatar), but the Ecuador match will be different,” he said at the post-match press briefing last Friday.

The other group game will see Qatar take on Nederland. Qatar has the worst record for a host country after they lost their first two games, they will be keen to salvage their image against the Dutch team. The match will be broadcast on World Cup Central (DStv channel 202 and GOtv channel 33) at 4:00pm.

In group B, all is set for an all-British game between England and Wales. The Welsh team has had a disappointing outing, recording a loss and a draw. On the other hand, Gareth Southgate’s men have had to settle for a win against Iran and a draw against the United States. The game will be live at 8:00 pm on World Cup Select 1  (DStv channel 205 and GOtv channel 31).

The United States and Iran will have to challenge each other for a slot in Round 16. Carlos Queiroz’s team got an upset victory against Wales and they can qualify for the knockout stage with just a draw. The Americans on the other hand must secure three points to advance to the knockout stage. World Cup Central (DStv channel 202 and GOtv channel 32) at 8:00 pm.

To enjoy the games, new customers can pay N4,900 instead of N6,900 for a GOtv decoder, GO-tenna, and a one-month Jolli package subscription. Existing customers on GOtv Max and Jolli can now watch all the games from the FIFA World Cup live on their decoder.

Customers can download the MyDStv or GOtv app to subscribe or upgrade or set up Auto-Renewal to stay connected without interruptions. You can also dial *288# to recharge.