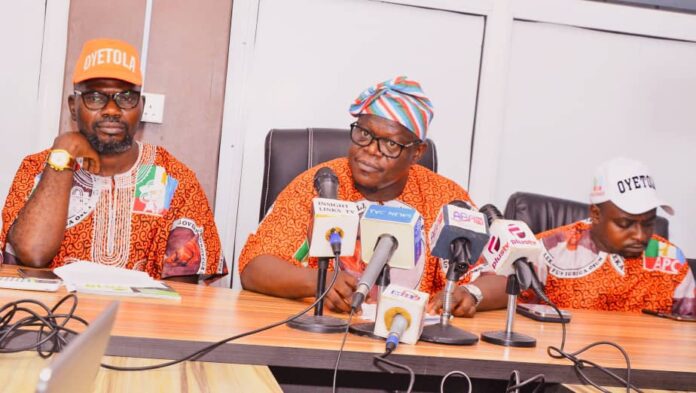 The reelection Campaign Council of the Osun governorship candidate of the All Progressives Congress, APC, has urged the anti-graft agency, Economic and Financial Crimes Commission, EFCC, to investigate the candidate of the Peoples Democratic Party, PDP, Ademola Adeleke, over his comment that he will induce voters before and during the forthcoming gubernatorial election in the State.

Governor Oyetola Campaign Council said it is pertinent to draw the attention of the anti-graft agency to the unguarded comment in order to challenge Adeleke and his party, the PDP, to explain what he meant by his comments that he had arrived with hard currencies to prosecute the election and to approach the election “fire for fire”.

Addressing a Press Conference, at the Ilerioluwa Campaign Office, the Director-General of the Osun APC Campaign Council, Senator Ajibola Basiru argued that for an individual to have declared publicly his uncontrolled and insatiable appetite for power to the extent of boasting to financially induce the electorate, he needed to be investigated and prosecuted by the anti-graft body to stop him from compromising the electoral process and fledgling democracy.

He called on the EFCC and other anti-graft agencies to beam their searchlight on the matter and summon the PDP candidate in the state for a thorough investigation and questioning to unravel what he meant by that he has brought pounds, dollars, euros, and other hard currencies to buy the vote.

“I expected the EFCC to have invited Senator Ademola Adeleke to give an account of what he meant by coming to the state with hard currencies for the Osun State guber election.

“Certainly, inducement of voters is a great offense. So, for Senator Adeleke to manifestly declare an intention to induce voters, warrants criminal investigation by EFCC.

“EFCC should summon him for investigation for questioning by what he meant that he has brought pounds, dollars, euros, and other hard currencies to buy the vote.

“That clearly is a manifest intention to commit the offense of inducement of voters which is clearly an electoral offense under the Nigerian law”, Basiru added.

The APC Campaign Council sent a strong warning to the PDP and its candidate to desist from the campaign of acrimony that had degenerated into violent attacks on the members and loyalists of the ruling party since Ademola Adeleke publicly declared his readiness to engage in a fire-for-fire approach.

Senator Basiru, who recalled some of the violent attacks on the party’s loyalists, said it has become imperative to intimate the general public with the clandestine move by the opposition Peoples Democratic Party, PDP, to kill, maim and harass leading figures in the Osun Government and the All Progressives Congress, APC, using political thugs, and then turn round to accuse the APC, its government and sympathizers as the brain behind the wicked act.

“You will recall that on Friday, May 16, 2022, the candidate of the party, Sen. Jackson Ademola Adeleke, at a rally in Osogbo, publicly proclaimed, among other things, that he had arrived with Pounds Sterling, Dollars, and other hard currencies to bribe the good people of Osun in the days leading to the election and on the election day. He went further to say that this time around, he would unleash violence and terror on the State. He insisted that this time around, it is “Fire-for-Fire.”

“We promptly reacted by cautioning him and letting him know that Osun people are not commodities waiting to be purchased off the shelf of any supermarket. These exchanges are well documented by both the conventional and digital media. We had thought he would heed our advice to play by the rule and call off the demons he intended to unleash on our people. But alas, a leopard will never change its spot. 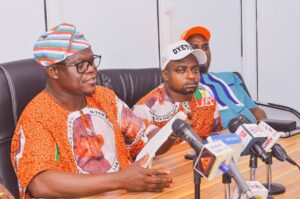 “In the early hours of June 9, 2022, we got an intelligence that a certain known political thug in the State, by the name Olamilekan Oyeyemi Ajagungbade, otherwise known as ‘Emir’, had been contracted by the PDP to carry out the destruction as part of the conditions to sign him on for further destructive operations in the State ahead of the elections.

“And by the next day, the destruction began. By Sunday, June 12, 2022, Emir moved to the PDP secretariat to dislodge another set of hoodlums that had been working for the PDP before his arrival. This led to a shootout between the two groups, as guns, machetes, and other dangerous weapons were freely used. Again, we have video documentary evidence of what transpired. In the end, several other passers-by, including some visiting investigative journalists, who were in Osun for an assignment, fell victim to the attack”, he said. 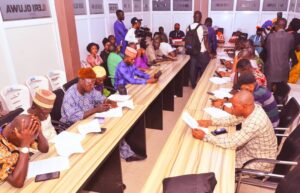 Basiru who reiterated the commitment of Governor Adegboyega Oyetola to continue to maintain peace and sustain the status of Osun as the most peaceful State in Nigeria regardless of any form of security threat from any quarter, said, “For the avoidance of doubt, our candidate does not believe in violence and you journalists seated here this evening can attest to that fact.”

He stated further: “The Osun APC remains law-abiding, responsible, peace-loving and we will never resort to violence or engage in any act capable of disrupting the peace of the State, more so when it is obvious that the overwhelming majority of the people of Osun are with us and are ready to re-elect their Governor for the second term of office.

“Unlike the PDP, we have been preaching peace and conducting ourselves peacefully since the campaigns began, and this is what we shall continue to do till the day of the election and beyond. We shall remain law-abiding, and responsible, and will never resort to violence or engage in any act capable of disrupting the peace of the State. 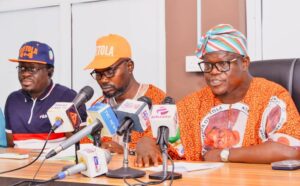 “Our candidate has proved in the last three and half years that he has the capacity to lead Osun. We shall campaign on what we have done, and they speak for themselves. Our candidate remains the candidate to beat come July 16, 2022.

“However, the PDP in Osun is reputed for thuggery and brigandage and have always exhibited violent tendencies even among themselves. They must be cautioned.”