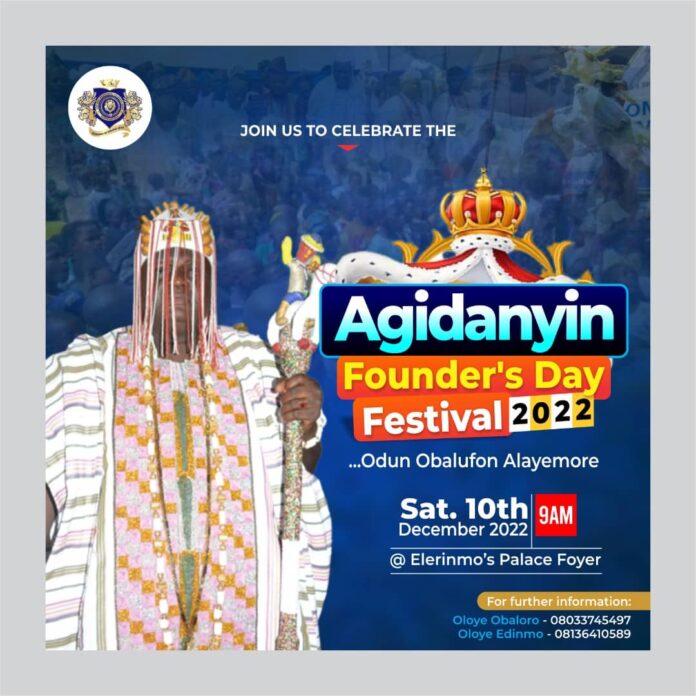 The ancient kingdom of Erinmo is set to hold Agidanyin Founder’s Day Festival 2022 on Saturday, December 10, 2022.

Agidanyin Founder’s Day Festival is one of the most revered cultural festivals marked in Erinmoland in Osun State. The festival comes with a celebration of cultural norms, and traditions with empowerment activities.

The Royal Father of the day is Oba Enoch Ademila Akinyemi Oyoyo II, Owa Oye of Imesi Ile, Special Guest of Honour for the day is Oba Ashiru Olatoye Olaniyan II Olobu of Ilobu Land in Irepodun Local Government Area of Osun State while Hon. Oluwole Oke, the House of Representatives member representing Oriade/Obokun Federal Constituency is the Chairman of the occasion.

The great progenitor Agidanyin Festival is remembered from time to time to offer prayers for peace and progress of Erinmo town.

Among the monarchs who have joined the Elerinmo and the residents to celebrate Agidanyin festival in the past include, Arole Oodua Ooni Adeyeye Babatunde Enitan Ogunwusi Ooni of Ife, Alaaye of Efon Alaaye in Ekiti State, Elegboro of Ijebu-Jesa and Ajalaiye of Ipetu-Ijesa”.

Erinmo is a town blessed and surrounded by several rivers that all possess healing powers and provide refreshing succor for household and personal purposes. Erinmo is administered under the Elerinmo who heads a council with over 52 chiefs some of whom are high chiefs also known as Iwarafa Mefa. Erinmo is a peaceful and religiously inclined town with the enormous advantage to be the food basket of the state as well as the spiritual Jerusalem of Nigeria considering the huge attractions to the spiritually sacred holy mountains of Erinmo which have attracted visitors from all over the world seeking and finding solutions to various problems.

Oba (Dr) Michael Odunayo Ajayi, Arowotawaya II, Elerinmo of Erinmo, direct descendant of the 3rd and 5th Ooni of Ile Ife Obalufon Alayemore who is known home and abroad with sterling working career said: “Erinmo as history has it was created by Obalufon Alayemore who left Ile-Ife with so many of his children, relatives, and descendants. One of his favourite children known as AGIDANYIN, a renowned hunter and warrior who was always beside his father and running errands for him left Ile-Ife with his father, Alayemore when they got to a place which they named ILOBI, with the permission of his father, AGIDANYIN and some people settled down, while Obalufon Alayemore proceeded to a virgin land where he established a town, (just beside present-day Erinmo) and named it after himself OBALUFON ALAYEMORE which was letter shortened to EFON- ALAAYE, EFON was coined from Obalufon while Alaaye was cut from Alayemore.

Oba Arowotawaya further said: “the name Erinmo according to history came while Obalufon Alayemore and his descendants were running when it seemed that his family and warriors were getting tired he will encourage them with the words “Erin” “Erin” “Erin” meaning “Walk” “Walk” and “Walk”. They decided to stop and relax after some time. Here they used palm fronds called “Imo” in Yoruba to make houses hence the name Erin- Imo which is now known as the present-day Erinmo. The great progenitor of Erinmo was AGIDANYIN son of Obalufon Alayemore. Agidanyin was a great fearless warrior who participated actively in several wars especially the numerous inter-tribal wars at that time. After Obalufon Alayemore installed his son Agidanyinmosa as the ruler of Erinmo – Ijesa, known today as the ELERINMO.”

Erinmo is a prominent ancient town in Oriade Local Government Area of Osun State founded on or about 1100 AD (as gazetted in Osogbo District, Ibadan Division file 1253 dated 20th August 1934) by the third and fifth Ooni of Ife, Obalufon Alayemore, located about 2km from Ilesa within the rain belt region of South West, Nigeria which enjoys her heaviest rainfall between July and September. The mean annual temperature is about 70 F (40 c) with the highest temperature during the dry season which is between December and March.

Erinmo is bounded in the East by Efon Alaaye, in the West by Iwaraja, in the North by Ijeda, and in the South by Erin Ijesa. The town which covers an area of over 11,000 square kilometres is sited on fairly elevated plain area and is almost surrounded by mountains.
Authentic history has it that the people in the present-day Erinmo originated directly from the cradle of Yoruba people, Ile Ife, and are direct descendants of Oduduwa the great ancestral father of the Yoruba race through the 2nd, 3rd, and 5th Ooni’s of Ife viz OBALUFON OGBOGBODIRIN and his brave son OBALUFON ALAYEMORE who left Ile Ife with his loyalists due to a misunderstanding with his uncle ORANMIYAN regarding his ascendancy to the throne of Oodua.