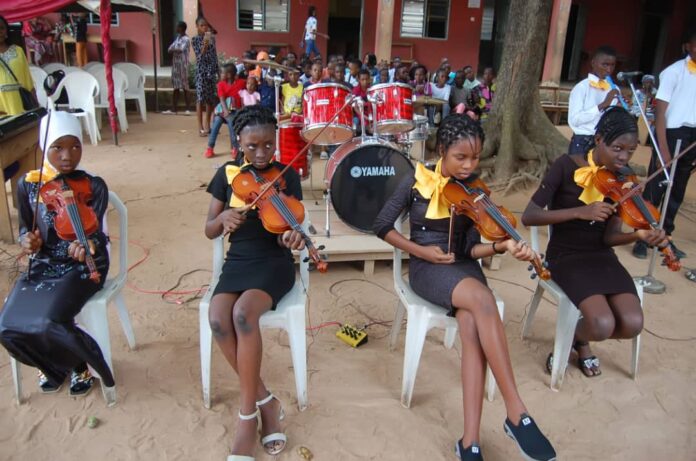 …as parents, and guardians extol the school’s virtues

The event held at the school premises at 25/27 Ajasa-Command Road, White House Bus Stop, was kick-started with praise and worship by Mrs. Augustina, which was witnessed by parents/guardians, among others.

Rev. Mother Ajiboye during ministration and prayer urged parents to be prayerful, monitor their wards, and children, be close to their children and avoid negative statements, especially in the face of social media influence. According to her, there is a need for parents to step up efforts in inculcating the right moral values in their children, as the school cannot do it alone.

She prayed for God’s grace to nurture the children into growing up to be notable citizens in society.

In his graduation speech during the event, the Principal of Femi Omolade Private Schools, Mr. Adesola E. Ajiboye, remarked that the school, established years ago, has produced many notable citizens spread across the country and in the diaspora was the best to be established in the environment and one of the top private schools established in Ajasa Command.

Mr. Ajiboye, who also displayed medals of different categories won by his pupils at various competitions (including Mathematics and sports competitions), also urged the graduating pupils, as well as college students in the schools, to aspire for the best in life, and assured that the school would do it’s best to ensure that the enviable standard set by the school’s founders is sustained.

He also commended the effort of the Lagos State government in providing a good road network linking the school to the urban places within the state.

He urged the government to provide adequate power supply, and an effective security network, among other social amenities, as factors that will enhance both private and public schools’ growth and proper development.

While assuring that he would use his wealth of experience to make the schools one of the best in academic, sports, and vocational studies, Ajiboye further appealed to the government, Parents, NGOs, and well-to-do individuals to encourage Femi Omolade Private Schools pupils and students to achieve it set goals, by awarding a scholarship to indigent ones.

Speaking to BusinessEcho Magazine, Mrs. Osowo, a parent, who spoke on behalf of others, commended the management of the schools for setting a good standard of education for its pupils and students.

She said, “Since I enroll my children in Femi Omolade Private Schools. I didn’t regret bringing them to this school. “When they were brought here, everything changed for the better. Today, I am proud of my children in both learning and character. I am sure other parents will have similar testimony to share.

“I advise the school management to maintain the tempo. I will also urge parents and teachers in this school to cooperate with management to achieve its lofty goals.”

Also speaking, an alumnus of the school, who also witnessed the ceremony, commended the school management for maintaining a good standard of education since its inception.

A student of the college, Miss Kamilat Moninuola Sulaiman, who also spoke to BusinessEcho Magazine, rated the standard of education in the school very high. He commended teachers in the schools for their high dedication and urged other parents to consider bringing their wards to the school for quality education and development.

The ceremony featured students’ music department, Stepper’s dancers, Choreography, and cultural songs in Igbo, and Yoruba, the presentation of gifts to parents, pupils, and students at the college by the school’s management, display of medals won by the school at different competitions, among other things.