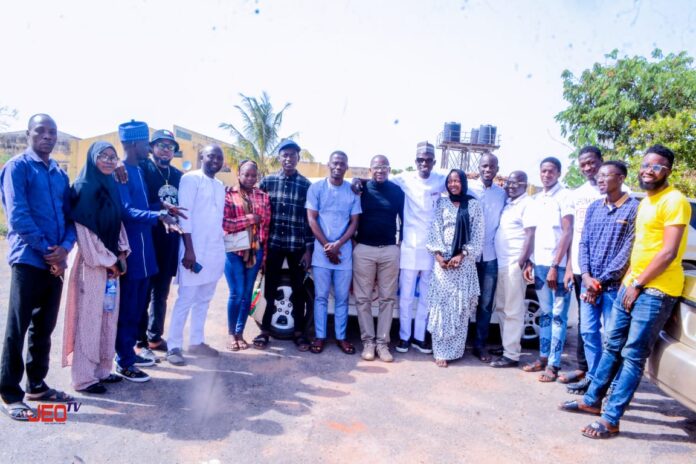 A Kwara State-based journalist, Dare Akogun has urged well-meaning Nigerians to contribute to the well-being of prisoners and the prison service in general, saying that the government cannot do it alone.

Akogun, who is a Senior News Editor with Ilorin-based private radio station Sobi FM, recently celebrated his birthday with inmates of the Mandala Medium Custodian Centre, Ilorin, where he fed the 430 inmates held at the centre and donated clothing and other items.

The journalist, alongside his brother, AbdulRasheed Akogun, another journalist, was remanded in the custodian centre in October 2022 over defamation allegation brought against them by a Kwara State government official.

The charge was later withdrawn after the duo had spent six days at the centre.

Accompanied by friends and colleagues, Dare Akogun said that prison inmates are also part of the society who must not be discriminated against, but rather shown love and compassion and be well catered for.

He said: “When I was here in October this year, so many people took their time to visit me in this place, and their words of encouragement helped me a great deal to cope during the period I was here.

My time inside here made me realise that life inside the prison is a lesson that can only be learned only if it’s experienced.

”I decided to celebrate my birthday with you guys in reciprocation of the love I was shown while I was here, and the support of well-meaning Nigerians who supported this cause with donations that have made today possible.

”I want to use this opportunity to call on well-meaning Nigerians to always remember prison inmates not only in times of celebration but every time they believe they have whatever it takes to support them and make their stay in prison conducive”.

The Officer in Charge of the centre, Assistant Controller of Corrections Oyedele Asiyanbi, commended Akogun and his friends for remembering the inmates despite their tight schedules.

Asiyanbi said that private individuals can do more to ensure that prisons are conducive for inmates, as the seclusion is meant to reform them to be good citizens whenever they are released back into society.

“I want to urge you to use your medium to enlighten the people and call on well-meaning Nigerians on the need to inculcate the habit of visiting the prisons for motivational talks and donating items that will make the prison conducive for inmates”, he said.