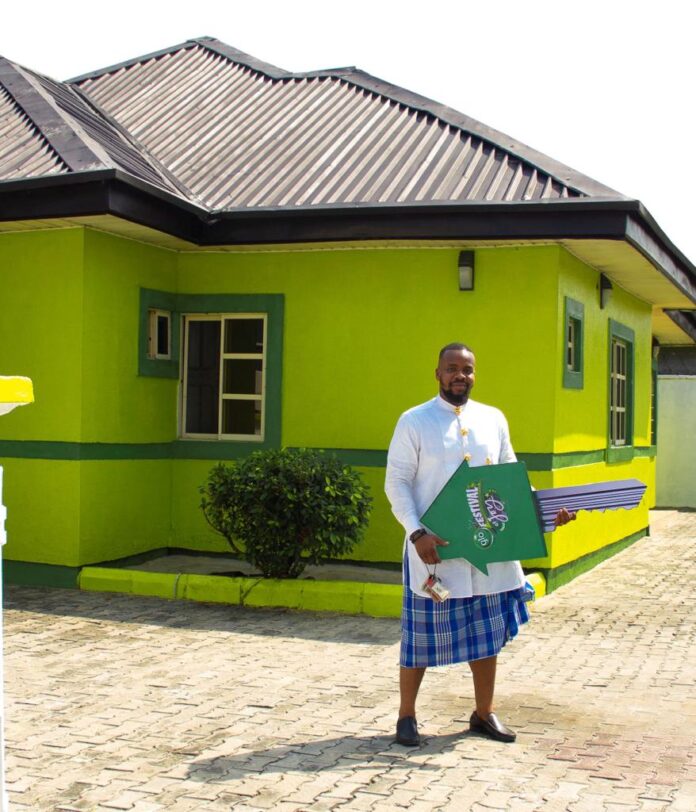 Twenty-six-year-old Chimeka Woke, whose name means “God, Thank You”, could hardly contain his joy and excitement at how his fortune changed so miraculously on Thursday, December 7, 2022, with a call from Glo officials informing him that his phone number had just been picked in an electronic draw as the winner of a 3-bedroom house in the ongoing Festival of Joy promo.

Just as he was beginning to get worried about how to raise enough money to pay for an apartment to move his wife and 11-month-old baby into, Globacom came to the rescue of Ikwerre, Rivers State-born legal practitioner by making him a landlord. He received the keys to the apartment at a colourful ceremony on Friday, December 8, 2022.

As he explained, he had just dropped off his recuperating father in the hospital for a physiotherapy session and was waiting when his phone rang only to be told that he had won a 3-bedroom apartment. “I literally abandoned my dad and ran to the Glo office on Aba road just to be sure I heard well”, he said, adding that it sounded too good to be true for someone staying in his father’s Boys Quarters to be called and told he had just won a house.

According to him, he had been thinking in the last few weeks about how to mobilize funds to rent an apartment that his small family of wife and daughter would move into. “It was as if God and Globacom were monitoring me”, he disclosed enthusiastically. He is full of gratitude to Globacom for initiating and sustaining such a massive subscriber-reward program.

The Ahoada Local Government Chairman, Barrister Ben Eke, said Globacom had established a reputation for giving back to society. “For allowing people to own a house, I must congratulate you. I am going to be your ambassador in propagating your good works”, he said.

His Royal Highness, Eze (Dr) Anugbom Onuhua, Eze Orlu Ekpodota 1, said “for what Globacom has done today, I am going to be an ambassador of the company, telling people what you are doing”.

Mr. Walson Dambo, the Head of Licensing and Operations at the Port Harcourt Zonal Office of the National Lottery Regulatory Commission (NLRC), said the commission has been following the promo to ensure compliance and commended Globacom for its commitment to the success of the promo.

The Glo Festival of Joy promo is offering 20 houses and thousands of other amazing prizes including 24 brand-new cars, power generators, sewing machines, and rechargeable fans to subscribers to reward their loyalty.