Following the uncompromising and unabated demands required, in the protection of Critical National Assets and Infrastructure (CNAI), in the country, the Nigerian Communications Commission, in partnership, with the Federal Ministry of Communications and Digital Economy, organised, a workshop, titled, “INTERACTIVE FORUM WITH SECURITY AGENCIES ON THE NIGERIAN COMMUNICATIONS COMMISSION’S (NCC) PRE AND POST – ENFORCEMENT PROCESSES AND PROCEDURES ( SOUTH – WEST GEO – POLITICAL REGION ).”

The highly crucial interactive forum, which was held, yesterday, Wednesday, 31st August 2022, at the Protea Hotel, Ikeja, in Lagos, witnessed, the convergence of the State Commandants of the Nigeria Security and Civil Defence Corps (NSCDC); from Lagos, Ogun, Osun, Oyo, Ondo and the National Headquarters (NHQ), Abuja.

The forum availed the trainers and participants, drawn from the NCC and the CNAI, the Legal and the Intelligence and Investigations Department (s), of the Corps, from the various State Commands aforementioned, ample time to adequately, receive lectures, on the following areas itemised below;

(i) Role of Security Agencies in Pre and Post Enforcement Activities of NCC, by the Head of Enforcement ( NCC ),

(iii) Spectrum and its Impact on Efficient Delivery of Communication Services, by Spectrum Administration Department (NCC),

(iv) Introduction to Communications Law and Offences, by Legal and Regulatory Services Department.

Furthermore, from the forum, the technicalities, needed to be understood, in order to ensure professional and ethical standards, during enforcement operations, by the NSCDC, in partnership, with the NCC’s human resources was also well conceived. 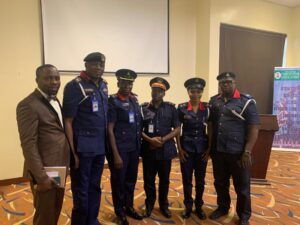 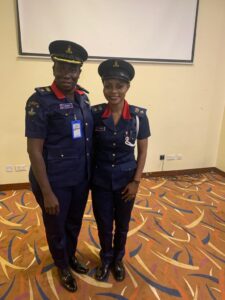 Finally, it is no more news that the Commandant General (CG), Nigeria Security and Civil Defence Corps, CG Ahmed Abubakar Audi, Ph.D., MNI, is absolute, committed and has continued, to channel the human, psychological, capital, and scientific resources of the service, towards the protection of all Critical National Assets and Infrastructure, of the nation at large, with a zero tolerance for compromise of any kind.