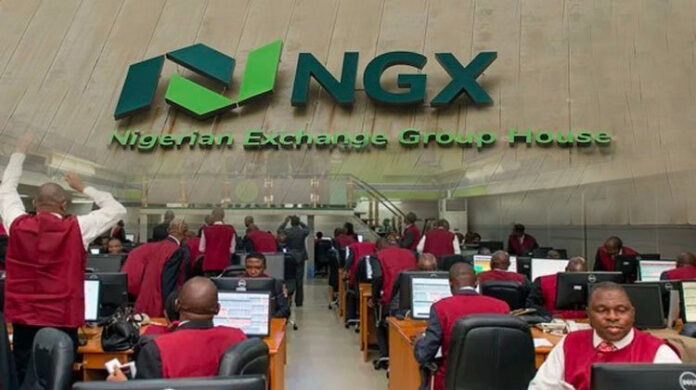 The Financial Services Industry (measured by volume) led the activity chart with 1.010 billion shares valued at N5.924 billion traded in 9,165 deals; thus contributing 81.37% and 37.81% to the total equity turnover volume and value respectively.

For the second consecutive week, the stock market segment of the Nigerian Exchange Limited (NGX) maintained its positive growth on the back of surge in buying interest from investors ahead of 2022 corporate earnings and actions from listed companies.

Performance across sectors was mixed as the NGX Insurance index recorded a weekly gain of 1.8 per cent, while NGX Oil and Gas index rose by 0.4 per cent. On the other hand, the NGX Banking index declined by 2.6 per cent W-o-W.

NGX Industrial Goods index went down by 1.1 per cent, while the NGX Consumer Goods index shed 0.4 per cent for the week.

Overall, a total turnover of 1.241 billion shares worth N15.668 billion in 18,560 deals was traded last week by investors on the floor of the Exchange, in contrast to a total of 1.286 billion shares valued at N29.634 billion that exchanged hands the previous week in 19,816 deals.

According to the NGX weekly report, the Financial Services Industry (measured by volume) led the activity chart with 1.010 billion shares valued at N5.924 billion traded in 9,165 deals; contributing 81.37 per cent and 37.81 per cent to the total equity turnover volume and value respectively.

Meanwhile, stock market activities for this week will be focused on the outcome of the Monetary Policy Committee (MPC) meeting of the Central Bank of Nigeria (CBN).

Members of the MPOC will meet on Monday and Tuesday for its first assembly in 2023 to assess the existing guiding economic principles amid the drop in the inflation rate in December 2022.

Looking ahead into the new week, analysts at Cowry Assets Management Limited said the positive sentiment is expected to continue as investors seek a better position ahead of the MPC meeting as well as the churning out of fourth and full-year earnings by listed corporates, saying “however, we continue to advise investors to trade on companies’ stocks with sound fundamentals.”

Analysts at Cordros Securities Limited, said, “we believe investors will focus on the outcome of the MPC meeting scheduled to hold next week to gain further clarity on the movement of yields in the Fixed Income (FI) market.

“If the MPC increases and there is a passthrough impact on yields in the FI market, there could be realignment of investments between markets that would pressure the performance of the equities market.

“As a result, we envisage cautious trading from domestic investors over the next week and the short term. Overall, we reiterate the need for positioning in only fundamentally sound stocks as the unimpressive macro environment remains a significant headwind for corporate earnings.”