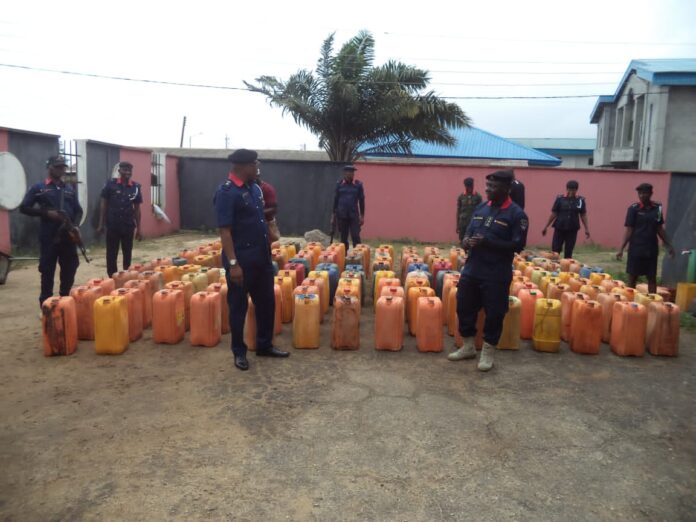 The renewed operational strategy of the Command, now yields positive results, in the fight against oil pipeline vandalism, illegal smuggling of oil products, and many more in Lagos State, Commandant Eweka said.

Eweka promises zero-tolerance against oil pipeline vandalism in the State.

In line with the renewed and reinvigorated efforts of the Commandant, Nigeria Security and Civil Defence Corps (NSCDC), Lagos State Command, Commandant Eweka Edenabu Okoro, MSC, ACMA, CNA, against oil pipeline vandalism and other forms of criminality, in Lagos State, the Marine and Anti – Vandal team of the Badagry division, Lagos Command, who were on routine surveillance and patrol, on Sunday, 14th, August 2022, at about 03:50hrs, at midnight, recovered, about one hundred and fifty (150), thirty (30) liters’ keg each, containing Premium Motor Spirit ( PMS ), also known as petrol, along the creeks and beaches within Agbara, Seme and Badagry axis, where they had been kept in batches by unknown suspected oil vandals, with the motive to smuggle them out of the country. 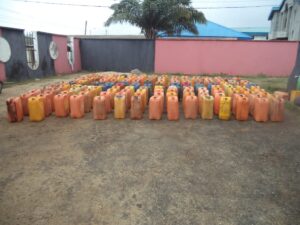 The Divisional Officer, Badagry Division, Lagos State Command, Chief Superintendent of Corps (CSC) Akinyemi Rasheed Ayodeji, who led the operation, with his gallant officers and men further stated that the recent charge of the State Commandant, poised at ensuring excellent performance, towards fulfilling the mandates of the Corps in the State, proactively motivated the Division to heighten the fight against economic sabotage and saboteurs in the Division.

“The suspected stolen oil products, amount up to about seven hundred and sixty thousand, five hundred naira only an estimate,” the Divisional Officer, Badagry Division, CSC Akinyemi Ayodeji said in a report.

The Commandant has immediately ordered the Anti-vandal unit of the Command to evacuate the suspected products back to the Lagos State Command, Head Quarters, in Alausa, Ikeja, Lagos, in a bid, to carry out further intelligent investigation on the matter and find a lasting solution to such ugly economic sabotage in the area and the State in general. 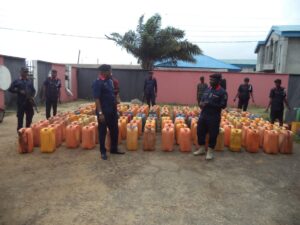 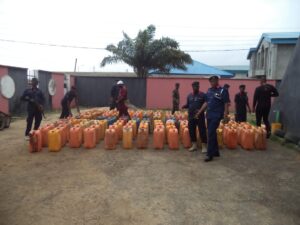 Commandant Eweka Okoro has also directed that the security of lives and property and the protection of Critical National Assets and Infrastructure ( CNAI ), in the Badagry Division and other oil pipeline areas, in the State be continuous, beefed up especially, now that remains few months to the end of the year, where some citizens may want to exhibit their desperation for illicit money at all cost, against the patriotic and collective development of the nation’s economy.

Finally, Commandant Eweka Okoro also seized the occasion of this excellent and gallant operation, to further reiterate the Command’s readiness and commitment to ensuring a zero-tolerance against oil pipeline vandalism and other forms of criminality in the State. He further assured the good people of Lagos and the Government of the State, of his unflinching commitment and dedication to sustaining the already established peace and security in the State. He promised that the Corps will continue to work assiduously and laboriously, with the Government and other security services or agencies and stakeholders in the State, to further proffer solutions to any form of security challenges that may want to raise their ugly heads, especially now and during the last quarter of the year 2022.