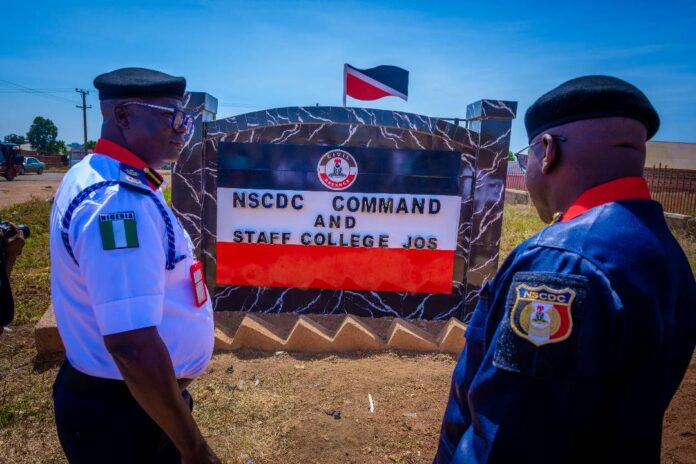 He stated this while on an inspection tour of the proposed college site and facilities located in the Lamingo community, Jos-North Local Government Area of Plateau State.

Dr. Audi emphasised that training and manpower development are pivotal to the growth, development, and success of any serious organisation, adding that NSCDC will continue to make giant strides in this direction until the maximum level of professionalism is attained.

He expressed profound gratitude to the Executive Governor of Plateau State, His Excellency, Simon Bako Lalong, CON, for donating the facilities to the Corps and promised to put the facilities to judicious use for it to serve as a training Institution.

The CG also appreciated the good people of the State and the Izere Chiefdom for accepting to accommodate the Corps in their community. 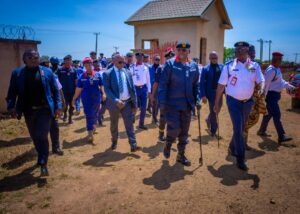 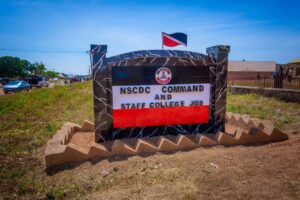 He explained further that the training would be divided into two categories, namely: Tactical and operational.

“The staff course is basically operational and would engage heads of units, Unit Commanders, and Commanders of teams at both tactical and operational levels.

“These are personnel who are being prepared to take over Command responsibilities, so that, by the time they become Commandants, must have been well equipped and the knowledge obtained at the Command course level would be transmitted down to the administration of Commands”, he explained. 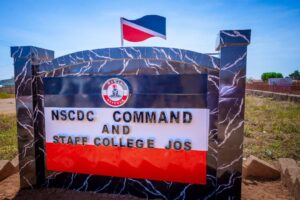 The Corps helmsman also informed that the courses for inspectorate cadre and other ranks will be regimental and a bit of capacity building and drills will be carried out in Katsina college.

“We will however concentrate more on regimentation because at this level, the boys’ physical strength and agility are expected to be seen very conspicuously.

“They are operational personnel who are supposed to implement the mandates of the Corps, so, they need to be properly groomed from the base so that as they grow to the Command level, they would have internalised all they have been taught and manifest it.

Audi stated that historically, the Corps does not have this institutional arrangement before and that is why efforts are now being made to professionalise the Corps through the recently developed Standard Curriculum for NSCDC’s training Institutions which has been presented to the Minister of Interior for ratification.

He assured that with the support the Corps is receiving from the Plateau State Government, the Command and Staff College should take off by the first quarter of 2023.

“We are taking training and manpower development to another level in the Corps in order to discharge our duties effectively and by the grace of God, we will succeed in our aspiration to move Nigeria forward in terms of security and development”, CG said.