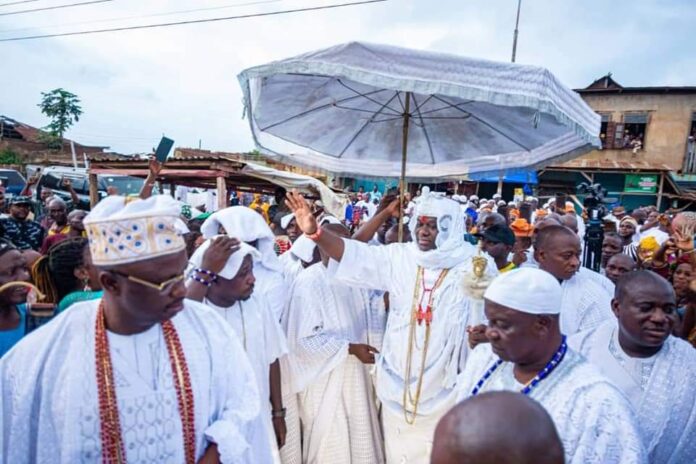 The lingering strike of the Academic Staff Union of Universities (ASUU) which has placed all universities in Nigeria under lock and key is part of the prayer requests of the Arole Oduduwa & Ooni of Ife, Ooni Adeyeye Enitan Ogunwusi Ojaja II as he on Sunday began the annual 7-day seclusion rite being part of the symbolic activities marking the annual Olojo festival in Ile-Ife.

Ooni Ogunwusi who appeared in his usual white traditional attire laced with colorful ancient beads told newsmen on his way out of his Ile-Oodua palace that he will use the spiritual moment of seclusion as a point of contact with God Almighty towards resolving all issues in Nigeria as the country gears up for next year’s General election.

The Co-chairman of the National Council of Traditional Rulers of Nigeria(NCTRN) explained that the government must as a matter of core urgency end the strike to avert the looming anger of Nigerian youths.

“The youths are angry and no one can blame them for that. Just imagine the number of months they have been kept out of school, ASUU and the government must unite and end this because we cannot handle the anger of the youths if they go out of control. They have started blocking highways and even threatening to lock the airports, which is an indication that they have been pushed to the wall.

“This is my seventh year on the throne and I have been serving humanity with a special focus on the youths of our country. Apart from investing hugely in human capital development and capacity building, I have engaged many of the youths as handlers of my projects and they have shown excellence in leadership. So I appeal to our government to look in this direction and make the necessary amendments. 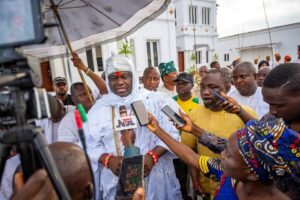 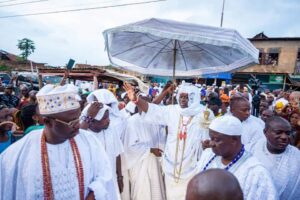 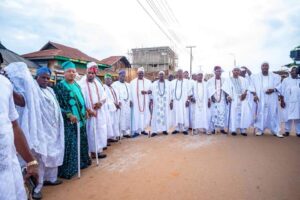 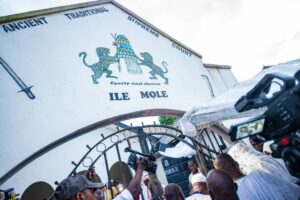 “During the recruitment process at the newly unveiled OjajaMore, over 50 percent of applicants are undergraduate students who are tired of staying at home which speaks to the fact that the ASUU strike has done a lot of damage. It is avoidable and it should be ended by the government and ASUU for the benefit of the youth.

“Next year’s election is equally another strong prayer request with which I am proceeding into seclusion, I want Nigerian youths to refuse to be used as thugs during the election while I pray that the process goes seamlessly acceptable to all the political parties for peace and prosperity of our land.” Ooni Ogunwusi said.

Explaining the potency of the seclusion exercise, the Ooni who will be incommunicado for one week and not grant audience within the days in seclusion said,” There has never been the time my prayer requests during seclusion is not answered by the Almighty, it has never happened. It is a period of fasting and prayer to appease God and seek blessings for our land.

Olojo festival connotes a strong indication of God’s creation and the day of the first dawn on earth, it is celebrated annually in Ile-Ife by all descendants of Oduduwa globally. While this year’s Olojo festival has already witnessed several activities, other key events lined up to make this edition superlative include as follows:

Friday 23rd September is for the ILAGUN(Dog sacrifice).Ojo Owode(Community cleaning)
Oonirisa’s Terrestrial Message to the world and Oonirisa’s Adire Hub Fiesta. Saturday 24th will witness the Grand Official Ceremony for the year’s Olojo celebrations after which the Ooni will adorn the sacred Aare Crown in a procession to the Okemogun shrine in honour of an agelong covenant with Ogun(God of Iron). Ife Grand Resort Musical Concert will hold much later same day.

Sunday 25th is for the Grand Finale Reception Party at the palace courtyard and Monday 26 will be for the Oonirisa Ancestral Traditional Propitiation which is a symbolic procession led by the Ooni to his family compound at Agbedegbede street in the Moore area of Ile-Ife which will be followed by Sinamania/BUGA Poolside Dinner while Wednesday 28th will climax the 2022 Olojo festival with Ife and Oodua clubs paying Homage to the Ooni.

Oba Elegushi Throws Weight Behind The Drum Festival In Canada, To Be Honored With An Award Of Excellence