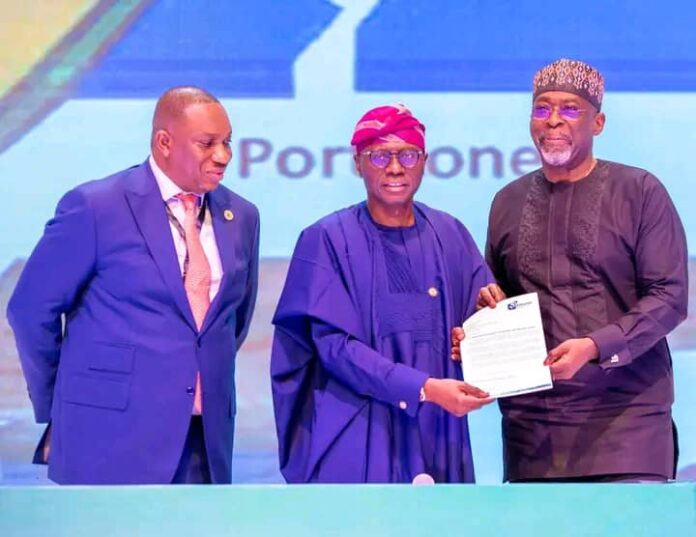 Lagos State Economic Summit (Ehingbeti 2022) has been concluded, but the State is already counting the gains of the two-day event.

Governor Babajide Sanwo-Olu, at the event, received the approval to build the Badagry Deep Seaport, which was approved by the Federal Executive Council (FEC) last August.

The approval authorises and provides the legal basis for the concession of the Badagry Deep Seaport, following the issuance of the Full Business Case Certificate by the Infrastructure Concession Regulatory Commission (ICRC) last April.

The $2.5 billion project, which will be funded through Public Private Partnership (PPP), will be built on approximately 496 hectares. It will have 2,470m quay length container terminal, 560m quay length break bulk terminal, 360m quay length OSB terminal, and a minimum of 18m depth.

It is expected to generate 250,000 direct jobs, enhance Government revenue and operate under a Build Operate and Transfer (BOT) concession agreement.

Sanwo-Olu signed also a Memorandum of Understanding (MoU) with Siemens Energy Limited and German-owned Deutsche Gesellschaft für Internationale Zusammenarbeit (GIZ) to set up an Energy Training Centre of Excellence at the Government Technical College in Ikorodu.

The training, which will be conducted in collaboration with the Lagos State Technical and Vocational Education Board (LASTVEB), will provide a Needs-based technical and vocational education to over 16,000 young people between ages 15 and 35.

The program is expected to produce highly skilled industry technicians with modern practice-oriented. Sanwo-Olu said a 30 per cent slot would be allocated to female candidates to enhance women’s participation in engineering education.

The Governor said: “We are excited that Lagos is on the way to having another deep seaport on the Western side of the city. Before the end of this year, we will be commissioning the Lekki Deep Seaport on the Eastern side. What it means is that what we have been suffering as a logistics and commerce hub of West Africa will be addressed when we increase maritime infrastructure that improves turnaround time in this sector. With this, Lagos is assured to remain the economic and commercial nerve centre of entire sub-Saharan Africa.

“The deal with Siemens and GIZ, which are German companies, is another promise made and a promise kept. We have a commitment to this partnership because of the conviction we have for its necessity. Thousands of Lagosians will be trained with industry-required skills for the future of work at our Vocational Training College. We are excited because we are not only transferring skills to people in Government but private citizens as well. The best technicians in Germany will be conducting this training.”

Sanwo-Olu also approved an Executive Bill titled “Lagos State Wealth Fund (LSWF)”. Lagos is set to becoming the first sub-national entity in the country to introduce the bill, which the Governor said would reinforce the State Government’s commitment to prudent management of resources and the delivery of shared prosperity to generations of Lagosians.

According to Sanwo-Olu, the bill has four main objectives, which include creating accessible savings for Lagos in times of dwindling revenues, accelerating development and the delivery of critical infrastructure, stabilizing the economy of the State by protecting its revenue from external shocks, and promoting investment and research in technology and innovation.

The bill, the Governor said, will be incorporated as a statutory entity and will subscribe to the highest level of corporate governance. The bill is transmitted to the House of Assembly for legislative approval.

Sanwo-Olu signed an agreement with Del York International Group for the entertainment giant to develop a purpose-built Lagos Film City and ancillary infrastructure to reposition Lagos as the hub of entertainment.

“The project will be located in Epe and sited on 100 hectares. It will be a mixed-use campus with the capacity to support the daily activities of 5,000 to 10,000 visitors. The facility will be a sanctuary of entertainment, leisure, and learning and it will be a place where films and creative industry professionals can live, learn and play,” Sanwo-Olu said.

Sanwo-Olu pledged before the gathering, comprising top Government functionaries, captains of industry, business leaders, diplomats, entrepreneurs, and investors, that his administration would implement all the resolutions reached at the summit before the next edition in 2024.

90% Drivers Of Inflation Are Not Addressed By Interest Rate Hike