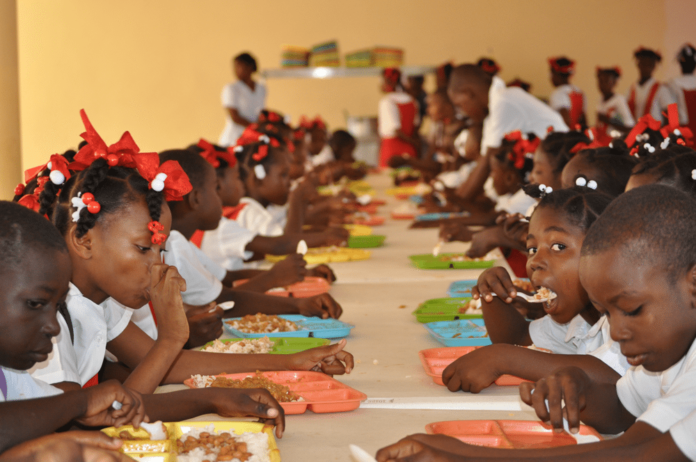 The Nigerian polity, for years, has been plagued with an astronomical number of out-of-school children, a situation which has been of major concern to governments; federal, state, and local even as both the international community and the private sector have put in, efforts, concerted, to ameliorate this anomaly which, over the years, has affected our literacy level and stalled the development of the nation.

Several reasons adduce for this though we must, first, acknowledge that the proportion of out-of-school children varies from region to region, being large-scale in the core North and less in the South. The propensity in the North can be ascribed, predominantly, to cultural influences though the general reason that subsists for all regions, is the economic handicap of parents who find it difficult to feed, to feed the children, at home, not to talk of sending such children to school where, apart from having to pay fees, buy uniforms and books, the onus of feeding such children, during school hours, would also be considered. After all, a hungry child, cannot, in any form be a good student. Hunger is not compatible with learning, not in any way.

Thus, the Buhari administration, at inception, in the bid to reduce the number of out-of-school children and increase enrollment in our schools, especially in our primary schools, having promised the same during the electioneering campaigns, introduced the National School Feeding Programme whereby our primary school pupils would be fed, in school, at least, once a day. How has this impacted our educational system and what, if any, other benefits have this scheme had for the nation?

It aims to provide children with nutritious mid-day meals on school days. The implementation, multi-sectoral, involves the ministries of Agriculture, Education, Finance, Health, and Information with implementation downloaded to the states.

The major objectives of the program, succinctly put, are as follows:
*To increase the enrollment rates of primary school children across the federation.
*To improve the nutritional and health status of school children. The occurrence of malnutrition in school children is greatly reduced.
*To stimulate local agricultural production whereby the income of farmers is increased through the creation of a viable and ready market.
*To enhance the trade performance of food sellers as well as those in the business of condiments for food production.
*To provide empowerment opportunities through the engagement of women i.e cooks thus improving family and local economy.

The scheme has gulped about nine hundred and ninety-nine million naira. That is a little below a billion naira. That, of course, is a huge amount of money and this, consequently, has elicited complaints from a section of the society who aver that what they see is not commensurate with what is acclaimed to be spent. Is this true? Are the complaints apt or are they far-fetched?

Looking at these complaints, we would need, justifiably, to look at the way the National School Feeding Programme is run. This would enable us, if we must criticize and question the veracity of implementation, to look at it, objectively, and apportion blames, appropriately.

A very good illustration is in the distribution of palliatives to Nigerian citizens during the outbreak of the coronavirus pandemic when the government resorted to a lockdown to curb the spread of the pandemic. Sadly, such palliatives meant to cushion the effects of the lockdown were locked up, by some states, in warehouses, and were discovered by the people. This was a very sad development, condemnable.

Nigeria considered a basket case in the number of out-of-school children, the federal government, in recognition of the exigency of curbing and reducing this malaise, initiated the National School Feeding Programme, through the Federal Ministry of Humanitarian Affairs. It is intended to cultivate and increase the eagerness, of the pupil, to attend school as the scheme encourages the pupils to ‘eat and learn’. This has its primary advantage of engendering the child’s interest in the learning process. While the food becomes a ritual, the child soon becomes an eager student who, consequently, learns a wide variety of lessons and, thus, our future leaders cultivate the habit of going to school. Subsequently, though gradually, illiteracy is obliterated and, in its place, is an educated class with a guarantee of a better future viz enlightened electorate who would be able to discern amongst the political class that a leader that means well and can bring development to our polity.

So far, almost ten million pupils have benefitted and taken out of the streets. This is a huge figure, commendable, and which, in turn, has its domino effects.

About a hundred and twenty-seven thousand cooks are engaged, across the thirty-six states and the federal capital territory. This is a remarkable employment drive that, quite naturally, would deplete the rate of unemployment.

Also, aggregators whose job it is to procure suitable food, rich in vitamins and proteins, are engaged across the states. These ones, it is, who deliver the food, the condiments, and the resources to the cooks for processing. These aggregators also add up to the national workforce.

Also, an appreciable number of our commerce is developed as the trade indices of the sellers of the food items and condiments as well as those in the supply of fuel for cooking is largely increased. The volume is increased, and so also is the frequency. Turnover increases and so also profit.

As a result, then, the National School Feeding Programme increases child enrollment, in schools, reduces the poverty level of parents for whom the burden of feeding is reduced, guarantees a brighter tomorrow, for Nigeria, and ensures more engagement in commerce even as more employable people are given work to do. The happiness is total; the child is happy, the parents are happy, the cooks, as well as the aggregators, are happy and, of course, the sellers of food, condiments, and even fuel, are happy.

To ensure effective implementation, the Federal Government provides guidelines and policies to the states to work with and ensures monitoring through the deployment of officials to the states for compliance.

It is instructive to note, then, that, where disbursements have been made and confirmed, any hitch can be attributed to implementation defects and should be treated as such.
However, because of detailed monitoring, the scheme enjoys a large percentage of success and has come to be regarded as synonymous with free education with additional free feeding incentives which, hopefully, will extend to secondary school students.

On the whole, the scheme, a very laudable one, which has enjoyed considerable success, should be continued and extended in scope.