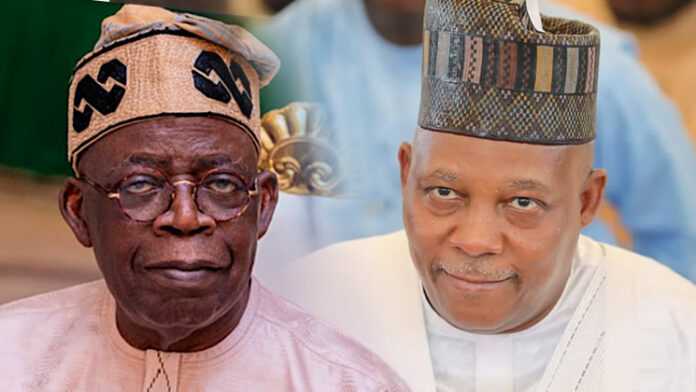 A group, under the auspices of the Tinubu/Shettima for Media, has stated that the combination of Senators Ahmed Tinubu and Kashim Shettima as the President and Vice President is proper for the development of the country.

The group said the All Progressives Congress presidential and vice presidential candidates were tested and trusted hands.

The coordinator of the group, Dr. Abiola Oshodi, in a statement on Tuesday, expressed assurance that comes 2023, the presidential candidate of the APC, would take over from the current regime of the President, Major General Muhammadu Buhari (retd.).

According to him, the two-term governors of Lagos and the Borno States respectively, and also elected senators of the Federal Republic of Nigeria are safe and experienced pairs of hands.

He said, “Because the duo (Tinubu and Shettima) have been tested and trusted and they would steadily steer the ship of the Nigerian state to a prosperous and healthy one to the admiration of all.

“They are experienced, they know where the shoe pinches, they know where Nigeria ails, and they know what to do, and because they are so experienced with both private and public backgrounds they will hit the ground running from day one. “Nigerians cannot afford to hand over the destiny of the most populous and the biggest economy in Africa to politicians not versed in managing a diverse and promising country like Nigeria.

”Senators Tinubu and Shetima both are versed in financial management, both are two-term governors, both have served in the Senate, both had worked meritoriously in the private sector and the public service, making them very grounded and as Nigeria transits from the Muhammadu Buhari- led administration

“They know how to manage the resources, human and materials committed to their hands – for Governor Tinubu turned around the economy of Lagos State and put it on a continuous and sustainable growth trajectory, he set up the Lagos State Security Trust Fund thereby rejigging the security of Lagos so that in the most commercialised city in Nigeria the inhabitants can sleep with their eyes closed and without fear of being unduly attacked.

”As for Senator Shetima as governor, thrived and excelled in the line of fire as Borno State witnessed monumental strides from 2011-2019 when he was the governor despite the sustained and continuous threats posed by Boko Haram and other terrorist groups.”

While urging the people to vote for the APC presidential candidate in the election, Oshodi, said they would not regret such a decision.