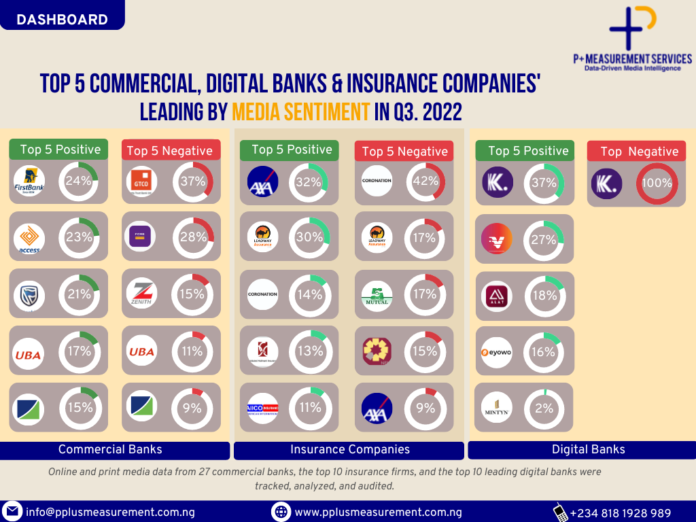 Since the beginning of 2022, the Nigerian Banking (commercial and digital) and Insurance industries have experienced an increase in media interactions, campaigns, and awareness.

These were boosted even further by the fantastic numbers it reported to the media in the third quarter of the year. The publication analysis includes over 1.2 million online publications from blogs, news sites, broadcasts, forums, and digital media in the local and international media space, as well as approximately 4,776 print publications (including daily, weekly, and monthly publications), which are being monitored to extract various metadata, including sentiments of reporters, editors, publishers, and opinion writers from various online and print publications, spokespersons analysis, CEOs performance, and other topics.

A cursory review of the commercial banks’ media reputation shows that three tier-1 banks and two tier-2 banks made the top five with the highest positive and negative sentiments in Q3 2022. The top five banks by positive reputation include First Bank with 24 percent emerging top of the grid, closely followed by Access Bank with 23 percent, with Stanbic IBTC Bank, United Bank for Africa (UBA), and Fidelity Bank having 21 percent, 17 percent, and 15 percent respectively while the top five banks by negative media reputation include GTCO with 37 percent, First City Monument Bank (FCMB) with 28 percent, Zenith Bank with 15 percent, United Bank for Africa (UBA) with 11 percent and Fidelity Bank with 9 percent.

The analysis below outlines the most important factors contributing to the positive reputation of the leading commercial banks, insurance providers, and digital banks in Nigeria in Q3 2022.

In the banking industry, First Bank’s leadership was reinforced when it praised its FirstMonie agents for completing more than 1 billion transactions and reaffirmed its leading position in promoting financial inclusion in Nigeria. Access Bank announced that it had rewarded its customers with millions in cash and prizes during its #AccessMore Mega Campaign, and Stanbic IBTC Bank echo that it had given out more cash prizes to Nigerians during monthly draws for its Reward4Savings promotion.

The insurance industry saw AXA Mansard emerge as the most innovative insurer of the year to solidify its position on the favorable reputation, Leadway Assurance signs a Memorandum of Understanding with FedCooP to cover 300,000 civil servants under its flagship, and Coronation Insurance declares that its premium income rose by 32.90% as its combined ratio also improved.

Leading the Digital Banks sector is Kuda Bank as it confirmed that it will charge its customers N50 for deposits of N10,000 and above, Vbank partnering with Autochek to guarantee the underwriting process for customers’ loan application process to deliver requisite financing to customers within 48hours of loan origination process and ALAT by Wema Bank stating that it introduced NQR to boost financial transactions in Nigeria.

Analysis of the negative reputational drivers in the banking sector revealed that GTCO which led in this segment was suspended by the Nigeria Customs from import duty collection, followed by FCMB which had one of its customers crying out as over N7m disappeared from his account and also Zenith Bank which was silent as the sum of N221,000 mysteriously left its customer’s account.

Coronation Insurance and others paid the sum of N78.6m to the NGX Regulation Limited as a penalty for default filing of financials, Leadway Assurance Company’s customer accused the brand of fraud over multi-million naira claims on damaged vehicle, and also Mutual Benefits Assurance declared that its loss rose to N5.425 billion in its 2021 financial result.

In the digital bank sector, Kuda Bank reportedly incurred a sum of N6 billion loss in 2021 which drove its negative reputation driver in Q3 2022.

Leading and rapidly expanding independent media intelligence company, P+ Measurement Services is an AMEC member and one of Nigeria’s top media intelligence providers. The agency serves as a media watchdog and technical support to communications and public relations managers and public relations firms by assisting them in keeping track of the media health of their brands and auditing media performance.

BUA Foods Decorated Yesterday As LEADERSHIP Company Of The Year 2022