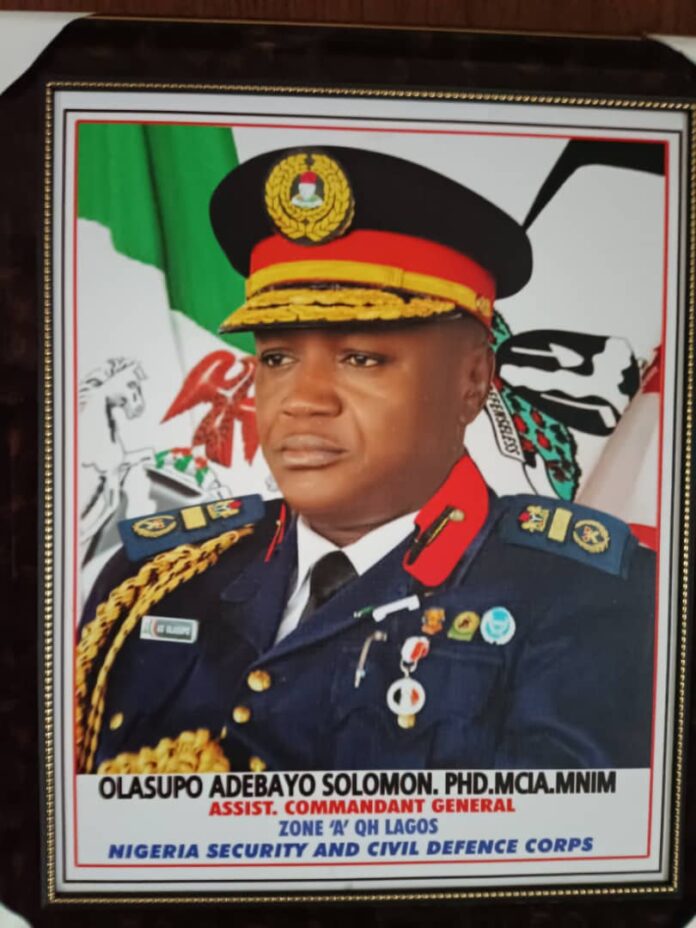 COMMANDANT GENERAL’S ORDER: ACG OLASUPO SOLOMON CHARGES THE LAGOS STATE COMMANDANT AND OTHER STRATEGIC AND TACTICAL COMMANDERS WITH A PARADIGM SHIFT IN THE APPROACH AGAINST VANDALISM OF CRITICAL NATIONAL ASSETS AND INFRASTRUCTURE (CNAI) IN ZONE A

In line with the constitutionally, clear mandates of the Nigeria Security and Civil Defence Corps (NSCDC) and the unparalleled, efforts of the Commandant General (CG), NSCDC, CG Ahmed Abubakar Audi, Ph.D., MNI, to rejig, revamp, reposition, and reinvigorate the Corps, towards maintaining twenty-four-hour surveillance, over infrastructure, sites and projects for the Federal, State and Local Government as pronounced, in Section 3 of the Principal Act of the Corps and as amended in subsections “3 ( 1 ) and ( 3 ),” of Section 3 in the Amendment Act of 2007, the Zonal Commander, Zone A Lagos, Assistant Commandant – General ( ACG ) Olasupo Adebayo Solomon, Ph.D., mcia, has immediately charged the Lagos State Commandant of the Corps, Commandant Eweka Edenabu Okoro, MSc, ACMA, CNA and other strategic, tactical and operational commanders, in the Zone, to deploy a number of personnel, to all the Critical National Assets and Infrastructure ( CNAI ), of the Zone.

The ACG Zone A Lagos, ACG Olasupo Solomon, Ph.D., mcia, expressly, gave the charge, in the presence of some media organizations, to secure all Critical National Assets and Infrastructure comprising; custodial centers, telecommunications, and electrical installations, railway stations, and assets, oil pipelines, schools, hospitals, stadia, national museum, national theatre and many more in the State, during an emergency, summon, of his management staff, strategic, tactical and operational commanders, today, Wednesday, 17th August 2022, at Zone A, Zonal Command Headquarters, at Obalende, in Lagos.

In his words, ACG Olasupo Solomon said, “the Commandant General, Ahmed Abubakar Audi, Ph.D., mni has instructed all management staff and heads of all NSCDC formations, across the nation to sit up and confront the criminally-minded persons in the society, with renewed vigor and determination, especially, in Lagos, which is the commercial nerve center of Nigeria.

“In a bid to achieve this, the CG enjoined all personnel on and off various beats to re-align and revamp their operational procedures and tactics with the prevalent risks and crisis management priorities of the country.

“We can as well achieve much more, by recognizing the existential threats to mutual humanitarian, public safety and security objectives strategically, shared between the NSCDC, and other sister security agencies across the federation.”

The Zonal Commander also seized the opportunity to seriously, warn criminal elements in the Zone, who specializes in the vandalization of oil pipeline, rail tracks, transformers, stealing of valuable bridge railings, manhole covers, and street lights to relocate as they have no hiding place in Lagos State. He further stated that anyone found culpable, of the acts will be immediate, made to face the full wrath of the law, in order to bring lasting peace and sanity to society.

The Zonal Commander as well lauded the Executive Governor of Lagos State, Governor Babajide Olusola Sanwo – Olu, for putting in place robust and proactive measures and strategies to boost the security architecture of the State at all times, in a bid to effectively, forestall all malicious threats, by economic saboteurs and criminals in the State.

He categorically, stated also that Lagos has remained one of the most secured states in Nigeria, because the Executive Governor has been able to mobilise and coordinate inter-agency security collaboration effectively, in the State.

The Zonal Commander also commended the excellent performance of the officers and men in the Lagos Zone and however, called for renewed commitment and dedication to duty, at this critical time, in our nation’s history.

“Finally, however, I also wish to state as follows; considering the enormity of threats and the importance of Lagos State to the economic and social well-being of the nation, officers and men of the Corps scattered across locations of security interests within and around Lagos State are to be swiftly informed that the Commandant General and his management team are leaving no stone unturned in ensuring all personnel’s welfare and rights are well attended to as at when due,” the ACG said.