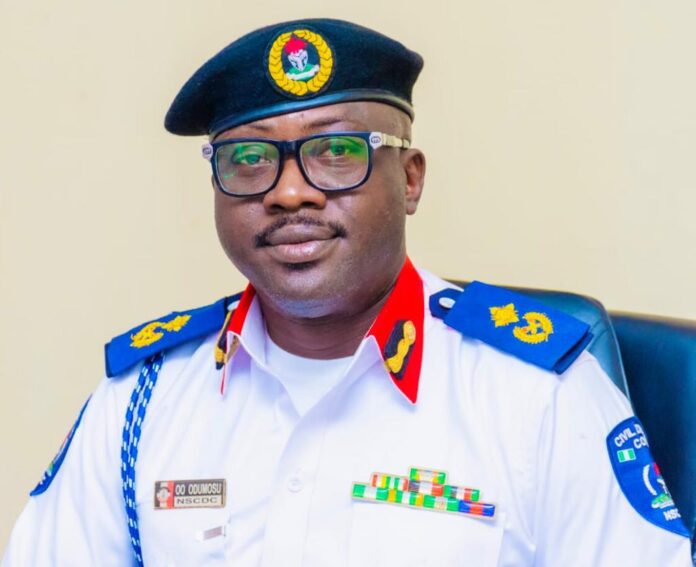 The Nigeria Security and Civil Defence Corps, (NSCDC), has distanced itself from a news story alleging that the agency snatched party money meant for vote-buying in the Ekiti State Gubernatorial election held yesterday.

The Corps wishes to state in clear terms that its operatives who were on election duty on Saturday, June 18, arrested two persons namely, Tope Aderibigbe A.k.a “Say War” aged 36, in connection with thuggery and one 42-year old Mrs. Oguntoyinbo Bilikisu for vote-buying.

It is instructive to point out that the Corps, through its personnel performed its legitimate duties in collaboration with other security agencies and critical stakeholders in line with clearly spelled electoral guidelines without violating any of them.

The two suspects were apprehended, after the attention of the NSCDC election monitoring team was drawn by the people, mostly, party agents, to a chaotic situation created by some individuals allegedly attempting to disrupt the peaceful conduct of the election through vote-buying an attack on voters by rented thugs.

The timely intervention of the Corps restored normalcy to the polling units. However, only a sum of six thousand thousand, seven hundred and twenty naira (N6,720) was found on the suspected vote buyer after a thorough search was conducted on her.

In spite of that, a preliminary investigation has commenced on the suspects, who were later released in order not to disenfranchise them after being accredited to vote as no incriminating materials were found on them.

To this end, the Corps wishes to state categorically, that there was no collection or hijacking of any money belonging to any political party, their agents, or any individual at Ikere-Ekiti Local Government.

The report is false, frivolous, and perhaps a figment of the imagination of the writer in an attempt to cast aspersion on the image and credibility of the Corps.

The Corps has worked assiduously in conjunction with other security agencies in ensuring a free, fair, and credible governorship election in Ekiti State, which was conducted in a peaceful atmosphere devoid of violence and rancor.

Members of the public are, therefore, urged to disregard and ignore such a mischievous report.

In an attempt to avoid such allegations and curb vote-buying at polling units, the Corps headed by Acting Deputy Commandant-General Operations, Haruna Lawal Muhammed alongside other top officers embarked on election patrol.

On patrol, the team received reports of vote-buying at wards within Ado – Ekiti, and Ikire and was able to disperse such a crowd.

The NSCDC is a noble organization with credibility and professional orientation, hence, its personnel cannot be moved by any monetary inducement, rather, they would report and return such illicit money to the authority, if such a situation had arisen as they have done in other past elections in the country.

Meanwhile, the Commandant General, Ahmed Abubakar Audi, Ph.D., mni, has congratulated all personnel who took part in the election for an impressive outing in Ekiti state, charging them to continue to be good ambassadors of the Corps wherever they find themselves on any national assignment.

He, however, assured all personnel, of the Corps’ commitment to ensuring that the benefits due to each operative are sorted out in due time.