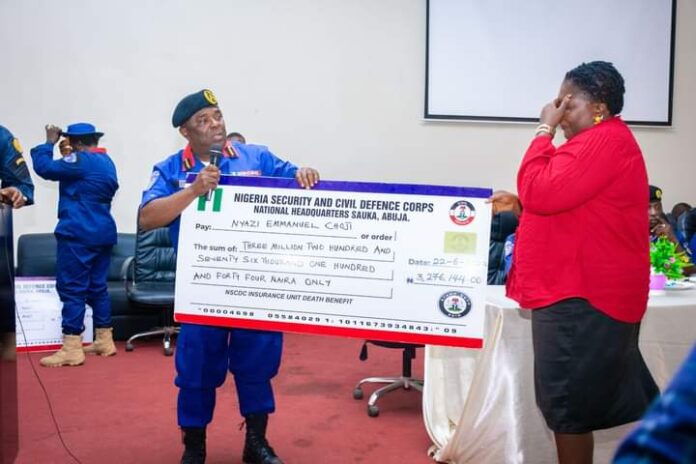 In fulfillment of the Commandant General’s promise to prioritize the welfare of the personnel of the Nigeria Security and Civil Defence Corps (NSCDC), over N200m was paid to families of personnel who died in the course of active service to the nation. 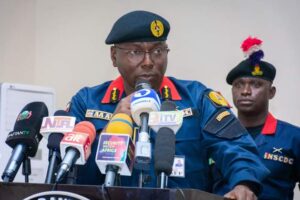 The NSCDC CG, in a brief ceremony at the Corps National Headquarters, Abuja, said research has shown that in order to achieve results on set goals, the workforce must be cared for adequately. This is to enable them to put in their best.

According to the CG, the operatives recognized were just a few amongst the backlogs recorded by the Corps.

“Chief among the priorities of my administration is to improve the welfare of personnel and one of such efforts is geared towards remembering our colleagues who served meritoriously and paid the supreme sacrifice in the process, leaving their families behind”

“We will continue to make serious efforts to encourage staff to put in their best while still in active service, we will work alongside the Head of Civil Service of the Federation to ensure the payment of others on the waiting list”.

“If you didn’t hear the names of your persons, don’t feel left out because we have a huge backlog and we are trying to see how it could be sorted out in due time,” Dr. Audi said. 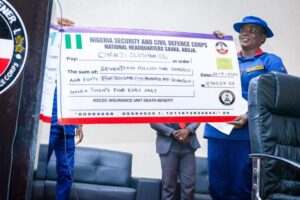 He thanked President Muhammadu Buhari and the Head of Service for attending to the needs of the Corps by ensuring that the pain and suffering of dependants left behind by deceased personnel are alleviated.

The representative of the Head of Service, Abubakar Mai Jam’ah assured the Corps of their continuous support and partnership, stating that all outstanding allowances would be paid as soon as funds are made available by the Ministry of Finance. 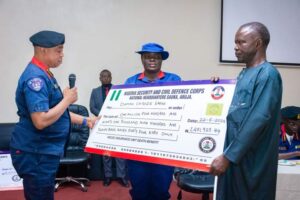 On the remaining backlog, he charged the Head of the Insurance Unit of the Corps to rise to the challenge of pushing for insurance for dead officers when due, to avoid delay.

The CG congratulated the beneficiaries and charged them as next of kin to make judicious use of the money received to better the lives of the deceased immediate family, so that, the death of their loved ones would not be in vain. 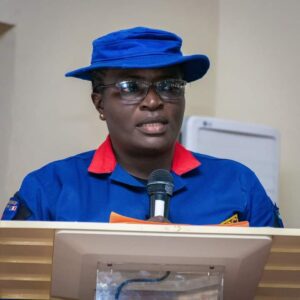 He explained that those who have not been able to get theirs now should be patient, adding that he inherited a backlog of arrears of death benefits when appointed as the CG and that, what he tried to do was to pay in batches as funds are released by the Federal Government through the Office of the Head of Civil Service of the Federation.

He also called on all the officers to always ensure they put in their best in the service, that, under his watch as the CG, he will ensure that personnel is less exposed to unnecessary risks and dangers but that, even in case of death, they would also be surely remembered.

Speaking on behalf of the recipients Okeji Olusegun Ojo, thanked the Commandant General and his management team for recognizing their sufferings since the demise of their loved ones and ensuring they get their benefits after such a long time.

He said it is a laudable achievement and would remain fresh and indelible in their memories for a long time.

We Will Sustain Our Fight Against CyberCrimes In Nigeria, And Across Globe