The day, Sunday, June 05, 2022, will for a long time remain indelible in the minds of the congregants and worshippers at CCC Genesis Global when the top echelon and leaders of Eagle Crime Awareness & Prevention Initiative (ECAPI) led by its National President/Founder, Amb. (Mayor) Samuel Eniola Adam paid an honored visit to the Spiritual Head/Shepherd in Charge of the Parish, the globally acclaimed Icon in Prophetic Ministry, a Resourceful and Energetic Minister, a Prolific Orator of God’s Word, and an Anti-Crime Ambassador, ECAPI Grand Patron in the person of PROPHET (DR.) ISRAEL OLADELE OGUNDIPE.

This important visit coincided with the CCC Annual Children’s Harvest Thanksgiving Anniversary which was well attended and celebrated by numerous children within the CCC Genesis Global Parish.

As part of the highlights of the day’s activities, it was indeed a great time for Prophet Israel Oladele Ogundipe to receive his adopted children from Ijamido Children Home, Ota who came to rejoice with and appreciate the Man of God for his sustained support to their welfare and sponsorship of their education. The children, who were delighted to be with their Adopted Father and Sponsor, performed a staged drama and thereafter presented a portrait in honor of both the Prophet and his Wife, Mummy Adeshola Ogundipe JP. 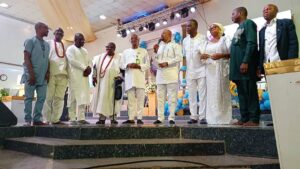 The high point of the day’s activities was when the Man of God acknowledged the presence of members of Eagle Crime Awareness & Prevention Initiative (ECAPI) and invited the Team to the podium amidst wild jubilation from the congregation.

Subsequently, in his honor, the President/Founder of ECAPI invited other members of his entourage to join him in making the presentation of the Award of Honour to this Great Man of God as well as his wife. However, before making the presentation, the Secretary-General of ECAPI, Alhaji (Prince) Ade Adeniran was invited to give a short profile on the organization as well as its objectives, while also addressing the motive and uniqueness of presenting Prophet (Dr.) Israel Oladele Ogundipe and his wife with such an auspicious Award. The session was brilliantly anchored to the delight of everyone present.

In his words of appreciation, Prophet Israel Oladele Ogundipe, who was full of gratitude, praised the Leadership and entire members of ECAPI both in Nigeria and diaspora for this unique honor done to him. He promised to always support the activities of ECAPI and will always make himself accessible and available to add his voice to the laudable activities of the Eagle Crime Awareness & Prevention Initiative (ECAPI) whenever he is called upon. He thereafter prayed for Divine enablement for the ECAPI vision and continued blessings for its members globally.