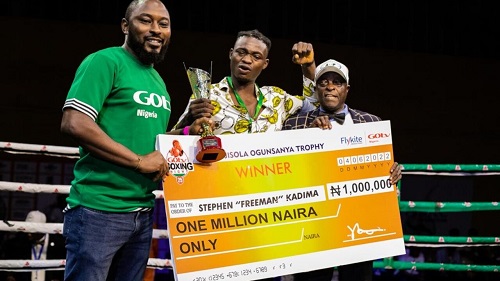 Stephen Kadima, the latest winner of the Mojisola Ogunsanya Memorial Trophy for the best boxer at GOtv Boxing Night, has thanked the sponsors, GOtv Nigeria, for the N1million cash prize attached to the award and for support for boxing in the country.

Kadima, who made his professional debut at GOtv Boxing Night 25 in Ibadan on Saturday, was adjudged the best boxer of the event by a panel of sports journalists after he defeated his opponent Michael “Emirate” Godwin.

He described his victory at the event as the biggest moment of his life and thanked the sponsors for making the GOtv Boxing Night a platform for identifying and developing talented boxers from across the country.

“I’m happy to have won the best boxer prize and the N1million attached to it. I thank GOtv for making this happen. I’m so excited. I’m more excited by their support for boxing and boxers. They have assisted the growth of the sport for a long time. Though Saturday was the first time I participated in GOtv Boxing Night, I had been watching it and I thank the sponsors,” he said.