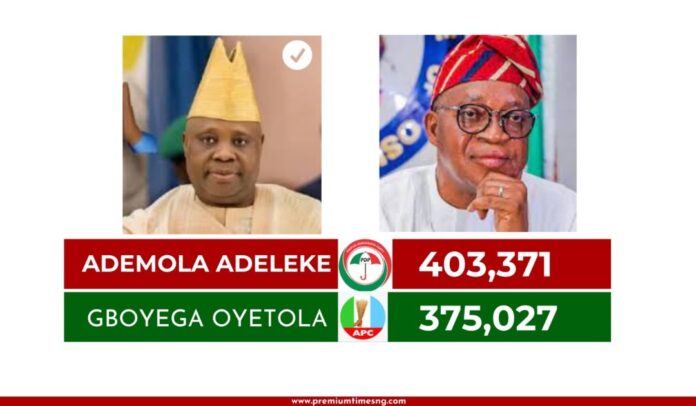 The Independent National Electoral Commission (INEC) has declared Senator Ademola Adeleke of PDP as the winner of the Osun 2022 governorship election.

The INEC Returning Officer for Osun 2022, Prof. Ogundipe of the University of Lagos declared Adeleke a winner on Sunday at the Commission Headquarters in Osogbo.

The electoral commission, INEC, has formally declared Ademola Adeleke of the Peoples Democratic Party (PDP) as the winner of the governorship election held in Osun State.

The runner-up was the incumbent governor, Gboyega Oyetola of the All Progressives Congress (APC), who polled 375,027 votes.

I hereby declare that Ademola Adeleke “having satisfied the requirement of the law is hereby declared the winner and he is returned elected,” Mr. Ogundipe said.

ROTA MEDIA earlier reported that apart from winning the total majority votes, the PDP also won in the majority of the state’s local governments. The PDP won in 17 of Osun’s 30 local governments while the APC won in 13. None of the other 13 candidates who took part in the election won in any local government.

A total of 15 political parties took part in the election held on Saturday across the 30 local governments of Osun. Many observers described the election as free of violence but characterised by vote buying.

The two leading candidates had also squared off in the 2018 governorship election in the state which was narrowly won by Mr. Gboyega Oyetola, although in controversial circumstances.

Recall in 2018, Mr. Adeleke was leading in the election before it was declared inconclusive by INEC which also ordered a rerun in seven polling units.

The re-run election was heavily militarized and many voters were disenfranchised by armed thugs. It was won by the APC candidate which also helped him secure victory in the general election.

Mr Adeleke, a former senator, would see his victory in the latest election as a vindication that he was the original winner of the 2018 election.