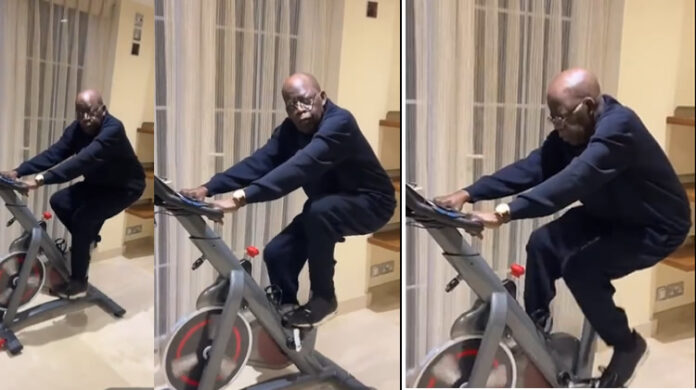 He said Nigerians were misconstruing the issues at hand, adding that though Tinubu is APC presidential flagbearer, he is yet to become Nigeria’s president.

With that, Keyamo said, the party, Tinubu, and the presidential campaign council would not be issuing press statements to explain the former Lagos State governor’s whereabouts.

Keyamo, who is also the Minister of State for Labour Employment, stated these while appearing on Arise TV’s The Morning Show on Thursday.

The PUNCH had reported on October 3 2022 that Tinubu explained he is strong and healthy while dismissing the rumour that he is dead. He also dismissed claims that he had withdrawn from the presidential race.

In a tweet accompanied by a video showing him working out on a fitness bike, he wrote, “Many have said I have died; others claim I have withdrawn from the presidential campaign. Well… Nope.

“This is the reality: I am strong, I am healthy and I am ready to serve Nigerians from Day One.”

But when queried on Tinubu’s whereabouts on Thursday, Keyamo said, “My information about our candidate is that he is hale and hearty. That is the information I get this morning. He is out of the country and he will be back in a matter of days. It is as straightforward as that.

“And to issue a statement every minute as to his whereabouts? the standard is not as high as being the president of Nigeria. He is just a candidate. Yes, he has some responsibilities towards the electorates and I do agree, but the standard is not as high as a president in office who could at every point in time issue statements as to his whereabouts.

“We are not going to live our lives for the opposition and mischief makers. I know there are some genuine concerns and inquiries, but there are also mischief makers. For those who are genuine like you, I think you should be satisfied when a campaign council spokesperson comes on air and say he (Tinubu) is hale and hearty. If you probe further, then it is mischievous.

“I spoke with Seyi (Tinubu’s son). The son is with him and the son says “daddy is okay” and that is our discussion this morning.”