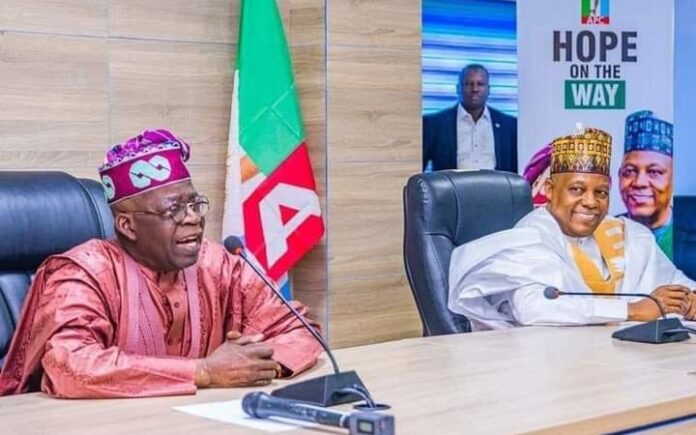 All Progressives Congress Presidential Candidate, Asiwaju Bola Ahmed Tinubu, has promised to undertake reforms within the farming, fishing, and livestock sector that will make the industry competitive.

He also promised to make the agricultural sector the bedrock of Nigeria’s new economy when he becomes president.

Tinubu said this while meeting with stakeholders in the agro-allied sector in Minna, Niger State on Monday, where he received rare endorsements from the crop and livestock farmers and fishing communities.

At the event, Tinubu, who adopted the presentation by the Chairman Progressive Governors’ Forum and Kebbi State Governor Atiku Bagudu, appointed him to head a committee to fashion a blueprint that will help position the Agric sector so that it can occupy its deserved pride of place.

The APC presidential flagbearer in his speech titled “Path the Agricultural Self-Sufficiency”, emphasised the important role agriculture played in the country’s economy before the discovery of oil.

While directing his speech to the farmer’s groups, Tinubu acknowledged that all the states in the country have the ability to offer one of two things to ensure that the nation fully produces what it eats.

He said, “Northern Nigeria has great agricultural potential due to its abundant arable land. It must continue to march at the forefront if the sector is to significantly advance at all.

“Every state and the FCT have some degree of competitive advantage in agriculture, whether horticulture or crop production, fisheries, poultry or animal husbandry. Properly developed, these assets will not only satisfy our domestic needs but make Nigeria a global force within a short time.

“If Nigeria fully harnesses its agricultural potential, our exports will rise to the level such that we shall feed much of sub-Saharan Africa, allowing us to better balance our economy while fostering social tranquility, stronger consumer bases and political goodwill between us and other nations in the region and on the continent.”

APC Chairman Adamu, a farmer himself, said Tinubu would do well for the Nigerian farmers because he understands their plight.

Speaking in the same vein, Governor Lalong said the APC presidential candidate is the son of a market woman who traversed both rural and urban communities as she plied her trade adding that as President of Nigeria, Tinubu will connect the city and rural economy to create prosperity for the farmers.